Aboriginal and Torres Strait Islander laws, often conveyed in lore, contain strict rules about social behaviours, warning and punishing those who act in a disrespectful and harassing manner. This sort of negative behaviour is taboo, and helps the community maintain a healthy relationship and a communal sense of wellbeing.

Harassment, bullying, and the danger of stereotypes

Aboriginal and Torres Strait Islanders have strict laws that dictate behaviour, social structure, and protocols for interacting with family, community, and partners. They are part of a complex kinship system that ensures individuals and the community live in a healthy and collaborative environment. Even so, laws can be broken, and that is why the lore warns people about the dangers of behaving badly.

Today, many racist stereotypes exist in mainstream Australian society that serve to disenfranchise and degrade Aboriginal and Torres Strait Islander people. Some of these stereotypes suggest that Aboriginal and Torres Strait Islander men are prone to domestic violence and abuse, with some falsely claiming that this is part of “traditional culture”. The truth is that these sorts of behaviours are taboo in traditional Law, which is reflected in a number of Aboriginal star stories.

These stories are narratives that feature a moral charter. They tell about beings who commit acts of violence and face strict repercussions and punishment. These narratives are recorded in the stars as a guide to follow sacred Laws and a warning to anyone who might try to break them. This is a sensitive topic in Australia, as many people have tried to use the damaging effects of colonisation to highlight a few cases of violence to blanket-stereotype all Aboriginal people. Indigenous scholars have written about the issue from a number of different angles1. The #MeToo movement emphasises issues that are critical for young people to understand, particularly about acceptable behaviour, and the harm and damage that result from bullying, harassment, assault, and inappropriate relationships. Traditional Aboriginal and Torres Strait Islander traditions discuss these issues in detail, and student can learn much from them.

In this lesson plan, we will explore traditional star stories that contain moral charters about the importance of respectful behaviour towards women and strict punishments for doing otherwise. This will show students that this sort of behaviour is NOT a part of Indigenous cultures, and that traditional Law dictates respectful and healthy relationships for personal, family, and community health and wellbeing.

A well-known and widespread tradition that crosses the country is that of the Seven Sisters2. The sacred narratives of this continent wide religious complex that travels the sacred route from the coast of South Australia to the coast of Arnhem Land, focuses on a man chasing a group of young girls. The man is composed of the stars in the Western constellation of Orion. And just like his Greek counterpart, the man is often seen as a skilled but vain hunter and someone who does not respect women. He falls in love with the young girls of the Pleiades and wishes to “make them his wives”, chasing them across the sky. But he is prevented from doing so by others (often other women in the stars), and faces punishment and humiliation for his crimes.3

The Kokatha and Ngalea peoples of the Great Victoria Desert call this man Nyeeruna4. In addition to being a vain man and skilled hunter, he is also a shapeshifter trickster. Nyeeruna is made up of the stars in Orion and stands upside down in the sky. He pursues the seven Yugarilya sisters of the Pleiades (Fig. 2). The sisters are timid and shy, and try to avoid Nyeeruna’s advances. They are protected by their eldest sister, Kambugudha (who is made up of the stars in the cluster called the Hyades). She knows that Nyeeruna is really a coward and she is not afraid of him, nor does she tolerate his inappropriate behaviour. Kambugudha blocks Nyeeruna from her younger sisters. He is angry that she is standing in his way, so he produces fire magic in his club, which he holds in his right hand (the red star Betelgeuse) and tries to cast it at Kambugudha.

Kambugudha is ready for him and she retaliates by collecting fire magic in her left foot (the red star Aldebaran) and kicks sand into Nyeeruna’s face, humiliating him and putting out the fire magic in his club. She then places a row of dingo puppies between Nyeeruna and herself, to keep him away. (The puppies are the stars of Orion’s shield in Greek traditions.) She also calls on Babba, the father dingo, to help. Babba attacks Nyeeruna, and the Moon and stars around support Kambugudha, putting the harassing Nyeeruna in his place. A primary social lesson is that Nyeeruna’s behaviour towards the women is unacceptable and breaks traditional Law. Kambugudha protects her sisters, and the community supports her in the fight against the bully Nyeeruna. 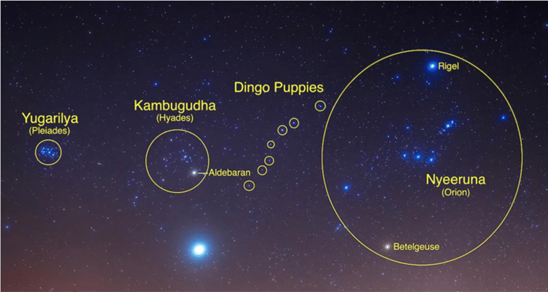 A number of traditional star stories from across Australia describe Laws that state abuse or harassment towards women is not acceptable and will result in consequences. Sometimes the punishment is physical and personal, while in other cases it can affect the entire community.

In Yolngu traditions of Elcho Island in Arnhem Land (NT), the Sun-woman and Moon-man have several daughters, who are smaller Suns. The traditions state that if the daughters are hit or disturbed by a man, the rain will not come and the wells will dry up5. This demonstrates that breaking this taboo can negatively affect the health, safety, and wellbeing of the entire community.

This classroom activity will involve sensitive topics: racism, harassment, stereotypes, consent, and appropriate relationships – all with a focus on improving personal, family, and community health and wellbeing. This will focus on in-class discussions about appropriate relationships, sexual harassment, bullying, racial stereotypes, and how these negatively affect health and wellbeing. Framed in star stories, the discussion will focus on traditional Aboriginal and Torres Strait Islander Law that forbids negative and anti-social acts. This discussion will aim to breakdown racial stereotypes, contextualise appropriate behaviour and the dangers of harassment and bullying, and communicating respectfully.

This resource addresses the following excerpts from the achievement standard for Years 7 and 8 in Health and Physical Education:

The teacher should explain the basic narrative of the stories noted above, and discuss the actions and consequences involved. A number of videos relating to various Seven Sisters traditions can be found online, and most deal with a similar theme. The astronomical component gives context to the deeper discussion that teachers need to lead with the class. An open discussion with students should address acceptable behaviours (ACPPS074), problems with stereotypes (ACPPS079), how bullying and harassment cause harm (ACPPS079), and proper relationships between children, teens, and adults (ACPPS074). It may be worth doing this in separate groups for boys and girls (and those who choose to join either side).

The astronomically themed narratives about Laws dictate interactions between men and women and appropriate behaviours towards others and can be highlighted as examples. The students can dig deeper into the meanings of the narrative and the ramifications of Nyeeruna’s actions. Such a discussion should include topics about respect, consent, and the repercussions of bullying and harassment. Students should also discuss the ways racial stereotypes cause harm to people and communities (ACPPS074, ACPPS079).