Indigenous Astronomy and the Solar System

Indigenous Astronomy and the Solar System

These traditions also describe the movements of these objects. In this module, students will learn about the motions of the planets across the sky, with special reference to a phenomenon called retrograde motion. These traditions show how Aboriginal and Torres Strait Islander people carefully observe the movements of celestial object, explain their motions, and pass that information on to new generations. This is how science works, and this module will show students that science was developed long ago by Indigenous peoples and is as integral a part of Indigenous cultures as music and art.

Aboriginal and Torres Strait Islander Knowledge of the Solar System

Aboriginal and Torres Strait Islander people are keen observers of the night sky, having detailed knowledge systems built around the Sun, Moon, and planets visible to the eye (as a distance from the Sun: Mercury, Venus, Mars, Jupiter, and Saturn). For countless generations, they studied the motions of Solar System bodies through detailed observation, which was recorded and passed to successive generations through oral tradition. Aboriginal and Torres Strait Islander people distinguished planets from the background stars, noted the changing positions of planets in the sky over days and months, observed their changing positions relative to each other, and characteristics of their journey across the sky.

In many Aboriginal traditions, the planets are seen as children of the Sun and Moon. They represent ancestor spirits walking across the sky, connecting ceremony and Law to various groups of stars. In Wardaman Aboriginal traditions, Uncle Bill Yidumduma Harney describes the planets moving across the sky as ancestral beings walking along a road. Just as you or I walk down the street, sometimes we stop and turn back before moving forward again. Sometimes we slow down and chat with other people during our journey. Uncle Yidumduma says the ancestral beings are coming back for another ‘yarn’ with other planets as they travel across the sky.1 Sometimes they come close together, in what is called a conjunction.

The Aboriginal people of the Great Victoria Desert observe how Jupiter and Venus always followed one another along the ‘Dreaming Road’ which the planet-ancestors had made. These planets are seen as ancestral beings with heads, but no bodies.2 The Dreaming Road described by some Aboriginal communities is equivalent to what Western astronomers call the zodiac. This is the region of the sky nine degrees on either side of the ecliptic (the path of the Sun). Since the Earth and all the planets orbit the Sun in one direction in a relatively flat plane, they will all appear to move along the zodiac (Fig. 1), or “Dreaming Road”.

In Western astronomy, the constellations found within the zodiac comprise the twelve star signs used by astrologers (although there are actually more than twelve). These are constellations through which the Sun, Moon, and planets pass. In Aboriginal and Torres Strait Islander traditions, these stars and constellations often have special relationships and connections to the Sun, Moon, and planet ancestor spirits. In Tiwi Lore of Bathurst and Melville Islands in the Northern Territory, the Sun-Woman carries her torch across the sky each day from East to West, reflecting the Sun’s diurnal motion from dawn to dusk. The Moon-Man follows the same path, illuminating his way with a smaller torch. He is often attended by his four wives: the planets Mercury, Venus, Mars, and Jupiter. 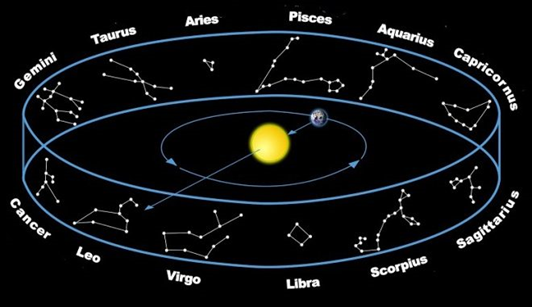 The Sun, Moon, stars, and planets all move diurnally (from East to West) over the course of a night. But if we observe their motions over the course of days, weeks, and months, we notice they have strange motions. Observers, including Indigenous people, know the positions of the planets with respect to the background stars gradually move from West to East night after night. Each planet is a different distance from the Sun, and this means they orbit at different periods. Mercury, the planet closest to the Sun, orbits the Sun in just 88 days. Saturn, the farthest planet we can see with the unaided eye, takes 29 years to go around the Sun once. This means the planets closer to the Sun than us are always relatively close to the Sun. Mercury is seen either just before sunrise or just after sunset, but not for very long. Venus is similar, but is further from the Sun, meaning it can be a bit higher in the sky. The other planets can be visible anywhere along the zodiac as they orbit the sun farther than Earth.

There are times when two or more planets come close together (conjunction) and the faster orbiting planet will overtake the slower, outer planet. From our perspective, it can appear as if a planet slows down in its gradual West to East motion, stops, then moves backwards. This is called Retrograde Motion. After a period the planet will slow down, stop, and resume its normal motion against the stars (Fig. 2). The Wardaman traditions about planet spirits moving back and forth during their journey along the Dreaming Road is a description of retrograde motion, showing us how Aboriginal people long ago observed the complex motions of the planets and incorporated that knowledge into oral traditions, which were passed to younger generations. 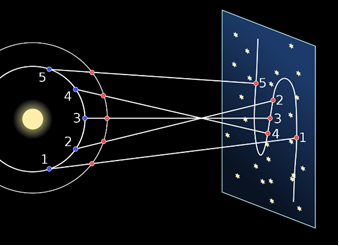 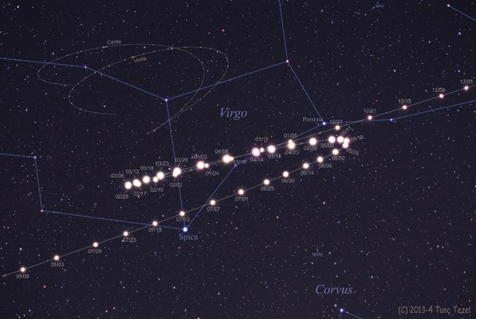 Fig. 2: (top) how a slower planet appears to move retrograde against the background stars as the faster planet (observer) overtakes it. Image: Wiki Commons License. (bottom) Mars making a loop in Virgo as a result of retrograde motion as seen from Earth. Image: Tunç Tezel (The World At Night/NASA Image of the day 28 Oct 2014).

This resource addresses the following excerpts from the achievement standard for Year 5 in Science:

It is useful for students to see how retrograde motion works visually, and to provide some local examples. You can use the digital planetarium software Stellarium5 to accomplish this. This can be done by the teacher at the front of class, or students in smaller groups.

This serves as a visual aid, enabling the students to see how careful observations are needed to note things like retrograde motion. Without the use of a computer, how did Aboriginal and Torres Strait Islander people in the ancient past observe and record this phenomenon in their oral traditions?

For an after-hours class activity, students should be able to identify the planets visible in the sky at sunset based on a few criteria. Planets can be distinguished from stars if they:

Point 3 is not always true, as some planets can twinkle under the right conditions. For example, Venus can twinkle if it is very low on the horizon, and the light coming through a thick layer of the atmosphere is distorted enough. In Kamilaroi traditions, Venus when it is twinkling low on the horizon is viewed as an old man who is laughing at a rude joke he told.

This will show students that this is no easy feat (imagine doing it all by memory!) but it is doable and can be very enjoyable.