Aboriginal and Torres Strait Islander people pass-on knowledge through oral traditions. This can include histories, story narratives, songs, and dances. Being oral cultures means the knowledge must be committed to memory, and the stories, songs, and dances are all ways people encode and retain that knowledge. Orality is extremely powerful, as vast volumes of knowledge are committed to memory and this knowledge can be passed down for thousands of years. The information is all part of Law – the rules that inform social structure and behaviour, all information about seasons, food economics, and navigation. Stories and songs often incorporate Lore into Law. Lore describes customs through the Creation stories and ancestor spirits that guide people through their daily lives.

Songs and dances are a popular way of communicating knowledge by cultures in the Torres Strait. The songs are both modern and ancient. The traditional sacred songs are called Kab Kar, and include traditional dance moves and dress. New songs and dances are also being developed today. Many Islanders are known for their complex choreography and song writing skills. We will examine a kab kar song related to the Moon called “Gedge Togia”.

Songs are a form of rhythmic oral texts and dances are physical representations of those texts. They serve as an important way of recording knowledge and transmitting it to successive generations. The dance movements are one of the ways in which information is transmitted, and masks, headdresses, dance machines, and other props are an important element to these performances. Traditional instruments include a bamboo drum (lumut) and the warup. A warup is an hourglass-shaped drum carved from hollowed driftwood, using the skin of a goanna as the drum-head. Information about the Moon dance comes from elders on Mer (Murray Island) in the Torres Strait, including Alo Tapim, John Barsa, Segar Passi, Ron Day, and Elsa Day. The video features Bradley Noah and Rocky Sambo (dancers), Alo Tapim and John Barsa (vocals and warup), and Michael Passi (lumut).

In the eastern Torres Strait, sacred traditional songs are called kab-kar. One of these is a Moon dance that helped the Meriam people win their legal battle for sea rights. It is called “Gedge Togia” and the lyrics consist of only three words: Gedge, Togia, Milpanuka1. These words are drawn from two different languages spoken in the Torres Strait. “Gedge togia” means ‘rising over home’ (in this case is island of Mer, or Murray Island – home of Eddie Koike Mabo) in the Meriam Mir language. This is the language of the eastern islands and the only Papuan language indigenous to Australia.

“Malpanuka” refers to the Moon in the Mabuyag dialect of the Kala Lagaw Ya language. This is the language of the Western Island groups, and is an Aboriginal language. Thus, the song describes the Moon rising over home as Meriam people travelled from Mabuyag to Mer. Mer lies 200 km due east of Mabuyag (Fig. 1). When Meriam people journeyed home, the Moon could be seen rising in the east. 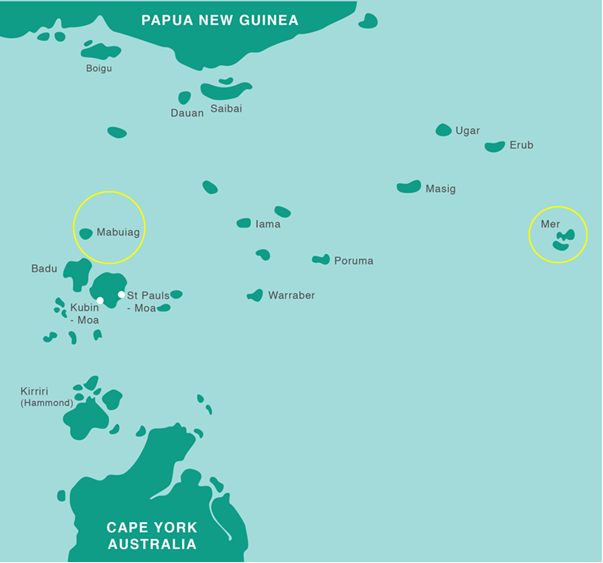 The dance itself featured two dancers in traditional garb (Fig. 2). The left arm is covered in an armband called a kadik, which was worn by warriors. This is meant to deflect weapons, with the warrior carrying a weapon in the right hand. The headdress is called a dhari, and is used in ceremony (the warrior headdress is called a baibaisam). The dhari is featured on the Torres Strait Islander flag (Fig. 3), surrounding a five-pointed star. The star signifies a navigational star, as stellar navigation is a critical element of Islander traditions2. The five points represent the five major island groups. The flag contains additional symbolism: the green bars represent the land masses of mainland Australian and Papua New Guinea; the blue represents the sea, and the black bars represent the people living between the land and sea. The colour white symbolises peace. The flag was designed by Bernard Namok in the 1992 as part of a design competition3. 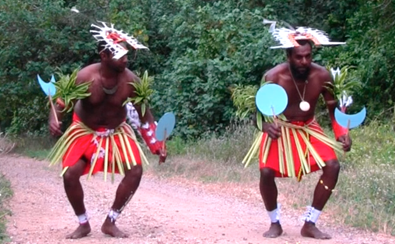 You will also notice the dancers holding two rods with different representations of the Moon on this tip. One is of the Full Moon, and the other of the New (crescent) Moon. The lyrics are in two languages but the dance is Meriam. The movements are common in traditional kab kar dances. 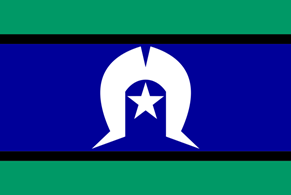 This song and dance shows close links between islands and languages, showing how Islanders travel and network across the Torres Strait. In modern times, this song became a critically important part of the Islanders’ legal battle with the Queensland government over sea rights. Lawyers for the government argued that sea rights were not necessary, as each island was an enclave of its own with no contact or interaction with other islands or groups. The Meriam people knew this was wrong, and cited the Gedge Togia song as evidence in court. The traditional song comprising two languages showed clear connection to the islands before the colonisation of Australia. Uncle Alo Tapim was one of the elders providing evidence in the court, and explained to the judge the meaning of the song and dance. This helped them win their sea rights.

This resource addresses the following excerpts from the achievement standard for Year 5 in English:

Suggested timing for activity: entire activity is 1 hour. 5 minutes to watch the video; 15 minutes to discuss the major languages in the Torres Strait and where the islands are on a map; 30 minutes draw and label the Moon diagram; and a further 10 minutes of discussion about the song’s meaning.

1 Hamacher, D.W., Tapim, A., Passi, S., and Barsa, J. (2018). Dancing with the stars – astronomy and music in the Torres Strait. In Imagining Other Worlds: Explorations in Astronomy and Culture, edited by Nicholas Campion and Chris Impey. Lampeter: Sophia Centre Press, pp. 151-161.