Aboriginal and Torres Strait Islander people have long observed the phases of the Moon and used it to understand the tides and the effect on the environment around them.

In many Aboriginal and Torres Strait Islander traditions, the Moon is generally viewed as masculine whilst the Sun is generally feminine1. In Yolngu traditions of coastal Arnhem Land, Ngalindi is the Moon-man. Yolngu traditions describe water filling Ngalindi as he rises, becoming full at high tide2. This causes him to grow as he rises becoming full at high tide. When the water drains out, there is a corresponding ebb in the tides. When full, he is viewed as fat and lazy. Anger drives him to kill his sons as punishment for not sharing their food. In retribution, his wives attack him, carving his body with their axes, causing him to wane away. He eventually dies for three days (New Moon) before resurrecting as a crescent (waxing Moon), growing again until full. The cycle then begins anew.

In Tasmania, Aboriginal people see this the other way around. A Palawa Creation story tells about about the Sun Man and Moon Woman. They rose into the sky together on the first day, but the Sun Man was faster than his wife, and she began to gradually fall behind. He illuminated more of her each night to encourage her to catch up (waxing Moon). Eventually she was on the opposite side of him in the sky, fully lit (Full Moon). This tradition not only explains why more of the Moon’s surface it lit as it waxes to Full Moon, but that the light we see on the Moon is reflected sunlight. Traditions describe how the cycle of the Moon is linked to time. The Moon completes one revolution around Earth with respect to the Sun every 29.5 days. Therefore, a “year” on the Moon is a month. In Many Aboriginal and Islander cultures, the words for ‘month’ and ‘Moon’ are the same, or closely linked. For example, the word “Meb” in the Meriam Mir language of the eastern Torres Strait means both Moon and month, explaining how the Moon completes a cycle over the course of a month3.

Coastal Aboriginal and Torres Strait Islander people linked lunar phases to the different tides and incorporated this into their knowledge systems. This knowledge informs hunting, fishing, and agricultural practices4. For example, Torres Strait Islanders observe the lunar phases to know the best times to go fishing. Elders explain that they prefer to fish during a neap tide rather than a spring tide. The main reason is that the stronger spring tides stir up the sediment, clouding the water, thus reducing the ability for fish to see the fisher’s lures, or the fishers to spot the fish. They explain that the best time to fish is during first and third quarter Moons, as these tides are foretold in the Moon5.

Meriam Mir people of the eastern Torres Strait have names for these lunar phases: The Moon is called meb (which is also the term for a month). The New Moon (thin crescent) is aketi meb. The First Quarter Moon is meb degemli. A nearly Full Moon (waxing or waning) is eip meb. A Full Moon is giz meb. A Third Quarter Moon is meb zizimi. For reference, a lunar eclipse is meb dimdi.

In physics terms, tides are caused by the gravitational effects of the Moon and Sun. When the Sun and Moon are aligned with the Earth, their combined gravity is stronger, creating the higher Spring tides. When the Moon is 90° to the Earth/Sun, their gravity counteracts the Earth-Sun pull, causing the lower Neap tides (Fig. 1).

There are usually two high-tides and two low-tides per day and they gradually increase in amplitude as the Moon goes from a Quarter Moon to either a Full or New Moon, then decrease as the Moon goes towards its Quarter phases. Since the Moon does not orbit the Earth in a circle, but rather a slight ellipse, the Moon is sometimes closer to us. Same applies with the Earth and Sun. If this occurs when the Earth reaches its closest point to the Sun, their combined gravity causes King Tides. The Earth reaches its closest point to the Sun around 2 January each year. If we get a Full or New Moon on or around this date, we will get a King Tide. In places like the Torres Strait, these can be very damaging as climate change causes the sea level to rise6. 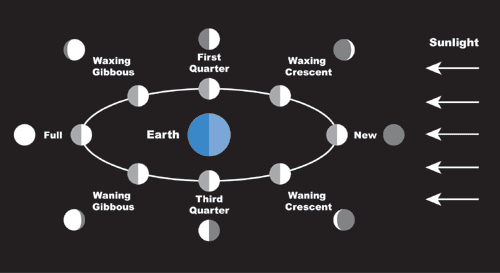 In this classroom activity, students will learn the relationship between lunar phases and tides, graphically plotting the tidal range versus Moon phase over an annual cycle for a selected Australian port, as well as determining the mean tidal range for each lunar phase. Students will then focus on determining the relationship between the lunar orbital phase angle (the angle the Moon makes with the Sun as seen from Earth) and percentage illumination of the Moon (i.e. how much of the Earth-facing lunar surface is illuminated by the Sun).

This resource addresses the following excerpts from the achievement standard for Year 8 in Mathematics:

In this activity, students will use graph paper to estimate the area of the lunar surface illuminated every three days throughout a lunar cycle, as a ratio of the total surface area. Students then calculate the phase-angle of the Earth/Moon/Sun at that time.

If the teacher uses screenshots from Stellarium (from a given place and time), the students’ work can be checked by clicking on the Moon during that phase. A drop down list of information is provided. One of them gives the percentage of Moon illuminated. 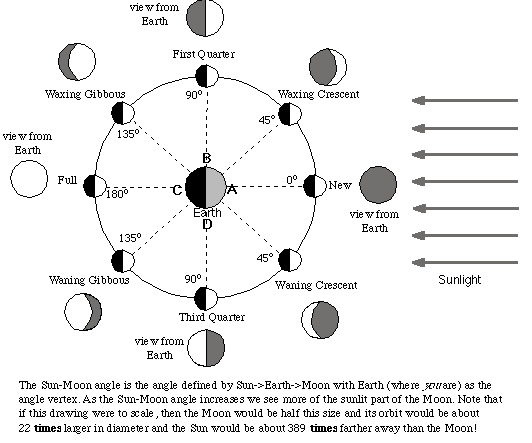 Activity 2 - Establishing the link between moon phases and tides

Using data from Activity 1 (or alternatively simply getting the information online), students will determine the correlation between lunar phase angle and tide amplitude.

Based on the calculated information, have student discuss what days are best for fishing, using the basic Meriam knowledge about fishing, Moon phases, and tides.

3 Hamacher, D.W., Tapim, A., Passi, S., and Barsa, J. (2018). Dancing with the stars – astronomy and music in the Torres Strait. In Imagining Other Worlds: Explorations in Astronomy and Culture, edited by Nicholas Campion and Chris Impey. Lampeter: Sophia Centre Press, pp. 151-161.

5 Hamacher, D.W., Tapim, A., Passi, S., and Barsa, J. (2018). Dancing with the stars – astronomy and music in the Torres Strait. In Imagining Other Worlds: Explorations in Astronomy and Culture, edited by Nicholas Campion and Chris Impey. Lampeter: Sophia Centre Press, pp. 151-161.