Aboriginal and Torres Strait Islander people pay close attention to the positions of the stars to determine seasonal change. This informs them about the behaviours of plants and animals that are used for food and medicine.

Aboriginal and Torres Strait Islander people pay close attention to the positions of the stars to determine seasonal change. This informs them about the behaviours of plants and animals that are used for food and medicine.

Aboriginal and Torres Strait Islander people carefully observe the positions of stars in the sky to predict seasonal change, which is linked to the behaviour of plants and animals. In Australia, many plants used for food or medicines are seasonal, so it is critical for people to know how the plants, animals, weather, and stars are interconnected. In this lesson plan, we will examine a seasonal food source that is found across Australia: the emu egg. We will focus on Kamilaroi and Euahlayi traditions from northern NSW.

The Celestial Emu is an Aboriginal constellation shared by many communities across Australia. In Kamilaroi and Euahlayi traditions of northern NSW, the Celestial Emu is made up of the dark spaces in the Milky Way between the Coalsack Nebula (next to the Southern Cross) - which is the emu’s head – down to the body in the Western constellations of Scorpius and Sagittarius. The legs extend down through the constellations of Ophiuchus and Aquila (Fig. 1).1 The position of the emu in the sky after sunset throughout the year informs people about the bird’s behaviour, including when it lays eggs. The representation of the emu in the sky can change throughout the year, depending on where it is positioned in the sky at dusk.2 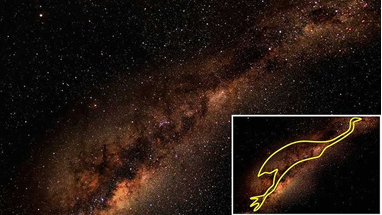 The Celestial Emu (called Gawarrgrgy in the Kamilaroi and Euahlayi languages) links to the breeding cycle of the terrestrial emu (called Dinawan). When it rises in the sky at dusk in April and May (Fig. 2A), it signals the start of the emu breeding season. At this time, the celestial emu is perceived as a female running as she chases a male to mate. Once they mate, the male sits on the nest and incubates the eggs. This is the best time to harvest emu eggs for food.

In June and July, the Celestial Emu begins to shift so it appears horizontal high in the sky at dusk. By June, most eggs have chick embryos in them, so the people stop collecting them for food. At this time, the Celestial Emu is seen as a male sitting on the nest. Come August and September, the emu in the Milky Way is vertical to the horizon at dusk, with the emu’s head pointing downward. The people now see the male emu getting up from the nest as the chicks hatch, which the males then rear and care for. Later in the year, the Celestial Emu shifts around, and is seen sitting in waterholes in the sky. Fig. 2 The changing perspective of the Celestial Emu through the year, each connected to a particular aspect of an overall dreaming narrative connected to the lifecycle of the terrestrial emu and its link to ceremony. (A) April-May, when the female terrestrial emu chase males and pairing up for mating. (B) June-July, when the male emus are sitting on the nest. (C) August, when the chicks begin hatching. (D) Oct-Nov, when it is seen ‘sitting in the billabong’ encouraging the summer rains. Image: Ghillar Michael Anderson and Robert Fuller (Journal of Astronomical History and Heritage), reproduced with permission.

Emus (Dromaiusnovaehollandiae) lay about 10-15 eggs per year, and incubation lasts ~55 days3. About half of the clutch leads to fully fledged chicks. During nesting, males sit on the nest 24/7 and aggressively defends it. Because of this, Aboriginal people use teamwork to collect the eggs. The people use an Emu Caller, a special device that looks like a miniature didgeridoo and mimics the sound of an emu4. People hide, and one person taps the device with the palm of their hand, making the emu-like sound5. This draws the male away from the nest, as he seeks to find and fight-off the phantom emu. Another person then runs to collect a few of the eggs, leaving enough behind so as to ensure a sustainable population.

Emu eggs are highly nutritious. They are rich in both monounsaturated fatty acids (MUFA) and polyunsaturated fatty acids (PUFA)6. An emu egg is quite large, weighing between 400 and 650 grams. This is roughly equivalent to a dozen chicken eggs. They contain about 30% saturated and 70% unsaturated fats (totalling ~360 calories/1506 kJ) and contain all eight essential amino acids. They are high in protein (~24 g), equalling 96 calories (402 kJ). They are comparatively low in carbohydrates, having only ~4 g of carbs, totalling 16 calories (67 kJ). Therefore, an entire emu egg contains approximately 475 calories (1987 kJ).

In these classroom activities students will explore the times of the year emu eggs are available for collecting and eating based on the position of the Milky Way at dusk. Students will examine the nutritional value of emu eggs and estimate how many people a single emu egg can feed, and how this relates to nutritional standards of The Australian Guide to Healthy Eating.

This resource addresses the following excerpts from the achievement standard for Years 5 and 6 in Health and Physical Education:

Activity 1 – Examining the role of star positions and seasonal change

Students can use the free computer software program Stellarium7 to explore the positions of the celestial emu in the sky when it rises at sunset throughout the year, and how this relates to the behaviour patterns of emus on the land.

Students should examine the nutritional value of emu eggs collected during a hunt, and estimate how many people they could feed based on their caloric value, and the values of fat, carbohydrates, and other nutrients.

1 Flick, B. (2014) Through Our Eyes - Dhinawan 'Emu in the Sky’ with Ben Flick. Retrieved from: https://www.youtube.com/watch?v=LzFYFutiwoA

5 Video of an Emu Caller: https://www.youtube.com/watch?v=9EuYRjU2PfQ

6 Emu Eggs: Are They Nutritious and Healthy? (Dr Bill Sukala). Retrieved from: https://drbillsukala.com/emu-eggs-nutrition/

8 Flick, B. (2014) Through Our Eyes - Dhinawan 'Emu in the Sky’ with Ben Flick. Video: https://www.youtube.com/watch?v=LzFYFutiwoA