The Indigenous Polynesian and Micronesian people of the Pacific are well known for their excellent navigational knowledge. Aboriginal and Torres Strait Islander people also developed techniques to navigate using the stars in a variety of ways, having their own names for the cardinal points (North, South, East, and West) in different languages.1 For example, cardinal directions in the Wardaman language of the Northern territory are Jongon (North), Gorro (South), Yiyanggu (East) and Namanya (West).2 In the Torres Strait, people use the stars in the Western constellation Ursa Major to find North.3 In the Meriam Mir language of the eastern Torres Strait, this constellation is called Beizam - the celestial shark. The gills of the shark point northward. In a similar manner, Aboriginal and Torres Strait Islander peoples across Australia use the Southern Cross to find South, and the Sun to find East and West.

Many Aboriginal groups constructed stone arrangements that mark these positions. These sites often contain stone circles or lines that mark the cardinal points4, often pointing to North/South or East/West.5 It is important to note that while this unit describes concepts of cardinal directions, many Aboriginal concepts of direction can be quite different to those of non-Aboriginal people.

Imagine the sky is a dome above our heads (see Fig. 1), a view often described in Aboriginal and Torres Strait traditions. We can measure the positions and movements of celestial objects along this dome. For an observer standing on the Earth, the angle along the horizon is called the azimuth. It is measured in degrees and moves in a complete circle around us: North (0°), East (90°), South (180°), West (270°). The angle from the horizon up in the sky or down below the ground is the altitude. It is also measured in degrees. On the horizon, the altitude is 0°, going up to 90° at zenith - the point directly above us.

An observer can measure the position of a star using these two angles: the azimuth along the horizon, and the altitude in the sky. Stars always rise and set at a given azimuth, but their altitude changes as they move across the sky. Some stars rise Due East and set at Due West. Other stars (especially those in the far north) appear to rise very low in the sky and set soon after. Some stars in the far southern skies never rise or set – they are always in the sky, doing loops around the South Celestial Pole. These stars are circumpolar. The line connecting North and South, running along the sky across the zenith, is called the meridian. When a star crosses the meridian, that is its highest altitude. 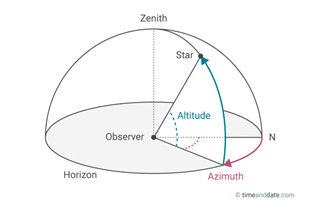 The Earth rotates on its axis at an angle of 23.5°. If you draw a line from the poles into space, you would notice all the stars moving in a circle around those points, called the Celestial Poles. The star Polaris lies very close to the North Celestial Pole, which makes it useful for navigation (thus its popular name as the “North Star”). However, as there is no single bright star near the South Celestial Pole, so we must use other techniques to find it. This will form the basis of the student activities.

Torres Strait Islanders use the stars of Baidam/Beizam (aka “the Big Dipper” in Ursa Major) to find North. The gills of the shark are the stars known to Western astronomers as Dubhe (Alpha Ursa Major) and Merak (Beta Ursa Major). They point directly northward. Even though the North Celestial Pole is below the horizon (as is Polaris, the North Star), you can use these two stars to estimate Due North. When the stars are directly perpendicular to the horizon (meaning they are straight up and down) they are pointing down towards Due North. The angular distance from Dubhe to the North Celestial Pole is ~30°. If the stars are not pointing directly down, you can measure this distance, then move straight up to the horizon to find Due North (Fig. 2).

In these classroom activities, students will learn the basics of celestial navigation by measuring the positions of stars in the sky in degrees, using their hands as a protractor. They will also learn how to find cardinal directions (North, South, East, and West) and their latitude on Earth using the angular measurements of stars. They will then test their measurements using the Stellarium astronomy app7.

This resource addresses the following excerpts of from the achievement standard for Year 5 in Mathematics:

Activity 1 - Measuring angles with your hands and fingers

In this activity, students will learn how to use their hands and fingers as protractors to measure angular distances between objects in degrees. The first in-class activity will provide students with the tools they need to conduct their own experiment outside.

This introduces students to estimating, measuring, and comparing angles in units of degrees, using their hands and fingers as a protractor (ACMMG112).

Aboriginal and Torres Strait Islander people used a variety of techniques to find cardinal points. In this activity, students will learn how to find the South Celestial Pole using the Southern Cross, as Aboriginal people did in the past. It will require teachers to familiarise themselves with the Stellarium astronomy software program beforehand.

This further develops students’ ability to estimate, measure, and compare angles using degrees, using the software-app as a protractor (ACMMG112). Students can increase the time to show that all the stars rotate around the CSP.

Activity 3 - Estimating latitude by measuring the altitude of the SCP

Students should use the tools they gained in class to find the SCP on their own at night. Aboriginal people travelled great distances across Australia for trade and ceremony. They would have noticed that the altitudes of constellations shifted as they moved to/from North/South.

Many Aboriginal stone arrangements are oriented to either North/South or East/West. One simple way to measure this is to drive a stick or stake into the ground on a sunny day.

This enables students to use a grid reference system to describe locations and routes using landmarks and directional language (ACMMG113) and further develops their ability to estimate, measure, and compare angles (ACMMG112).

3 Hamacher, D.W. (2013) A shark in the stars: astronomy and culture in the Torres Strait. The Conversation, 10 July 2013. https://theconversation.com/a-shark-in-the-stars-astronomy-and-culture-in-the-torres-strait-15850