Aboriginal and Torres Strait Islander people developed extensive knowledge about the world around them through observation, experimentation, experience, and deduction.

Just like art and music, science is an integral part of Indigenous cultures around the world, including Australia. In this module, teachers and students will learn ways Aboriginal and Torres Strait Islander people observe the twinkling of stars to predict weather and seasonal change. Students will learn the science of scintillation (twinkling) and see how Aboriginal and Torres Strait Islander understood and utilised this principle long ago.

Torres Strait Islanders carefully observe the different ways the stars twinkle, including their speed, any colour changes, and sharpness of stars.1 This is utilised to predict changes in the weather and foretell seasonal change. On Mer (Murray Island) in the eastern Torres Strait, the people closely observe the stars. If they twinkle rapidly, the observer can forecast weather and wind speeds. In scientific terms, scintillation (twinkling) is caused by refraction of starlight as it travels through columns and layers of moving air in our atmosphere - each layer having differing temperatures, densities, and speeds (Fig. 1). This is turbulence. High turbulence from hot, fast winds result in very rapid twinkling stars, whereas stars visible in cooler, calmer conditions shine with a relatively steady light. 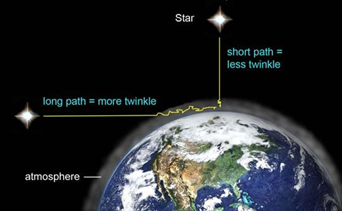 Meriam elders say they watch the “top stars” (high altitude stars) to get the most accurate reading. Due to the curvature of the Earth the relative thickness of the atmosphere differs depending on the angle of altitude. When looking towards the horizon (low altitude), the layer of atmosphere from our viewpoint is much thicker. Therefore, more starlight is refracted and absorbed than for observations directly overhead (high altitude, reaching a peak at zenith – the point directly above our heads). For this reason, bright stars at high altitudes (shining through the equivalent of one-atmosphere thickness) are better indicators for weather forecasting than those close to the horizon. On the horizon, starlight must pass through the atmosphere that is about 30 times thicker than the atmosphere when looking at zenith (straight up).

Elders explain that Meriam people also look for colour changes in bright stars as they twinkle. Normally red stars appearing bluish in colour indicate humidity. If the stars are twinkling rapidly, appear blue, and look fuzzy, they know a storm is approaching. Elders explain that blue twinkling stars that do not change colour indicate clear, hot weather. This is common during the Nay Gay (hot/humid) season from October to December. Stars twinkling rapidly but appearing blue in colour indicate approaching storms that are common in the Kuki (monsoon) season from January to April. Near the boundary of these seasons (December), Islanders watch for rapidly twinkling stars when ground conditions are pretty still. This is a sign of the changing trade winds, shifting from the cooler south-easterlies to the hot, wet north-westerlies.

Changing colours of stars, as well as them looking fuzzy, is evidence of Meriam science in action. These properties inform observers about the conditions of the local atmosphere. Water vapour absorbs light in the red/infrared end of the colour spectrum (Fig. 2). As a consequence, as atmospheric moisture and humidity increases, red-orange stars tend to lose their ruddy colour and appear more bluish-white. Another effect of high atmospheric moisture and humidity is that stars tend to look more diffuse rather than sharp pinpoints of light, as is the case in very dry air. This effect is seen more readily in the fainter stars, especially along the band of the Milky Way. Some astronomers give it the term “Vaseline Sky”, as it is just like trying to look at the stars through glass smeared with a thin layer of Vaseline.

For Meriam people, these observations inform fishing practices. Elders explain that “when the stars ‘twinkle hard’ (rapidly) and the wind drops”, this is a good time to go fishing. If fishermen are out on the reefs, they can read the stars to know if they are safe to travel back home.

Islanders also note that not all the stars in the sky twinkle. Some of those are not stars, but rather planets. Because the planets are much closer than the stars, the sunlight reflected from them is not severely affected by our atmosphere. This was one of the ways Islanders distinguished planets from stars, which they called “epreki”2.

Similar scientific principles are found in Wardaman Aboriginal traditions of the Northern Territory. Uncle Bill Yidumduma Harney explains that Wardaman people predict the wet season (from October to April) by looking for the bright twinkling of of the star Canopus (Ngilmungngilmung) in the dawn skies of September3.

This activity involves watching a video of an elder playing a Meriam star song and learning about the scientific information it describes. It will help students learn how scientific information is developed in situ from the local environment and ecology. Students will hear the song, learn the translation, and describe the scientific information it describes by examining weather patterns in the Torres Strait and how twinkling stars are used to predict this seasonal change. The song Wer Naskaisreda (The Twinkling Stars) was originally composed by Meriam man George Passi in the 1960s, and is a more contemporary song. It is sung in the Meriam Mir language. This activity builds on what students learned in the Year 5 English module on Indigenous astronomy, in which they learn about a traditional sacred kab kar dance from the Torres Strait.

This addresses the following content descriptions from the Australian Curriculum:

This resource addresses the following excerpts from the achievement standard for Year 8 in Science:

This song describes seasonal change that occurs later in the year. In November and December, the air is very hot and still, but the skies are clear. The wind if often very lor or dead still, something the Islander call duldrum. They can see the stars rapidly twinkling above. This foretells a shift from the cooler, dryer season (Sager) dominated by southerly trade winds to the wet season (kuki), which is dominated by northwesterly trade winds. At this time of year, the winds are high altitude and are calmer at the ground level. These strong winds make the stars twinkle, hence the song.

Suggested timing for activity: Up to student. Could take place over a period of days or weeks

Teacher notes: This in an out-of-class experiment for students (ACSIS139)

Teachers should know that if planets are close to the horizon, they may still twinkle. A Kamilaroi tradition from northern NSW tells about the planet Venus twinkling brightly when it is low on the horizon. The people see it as an old man who is laughing at a rude joke he told.6

1 Hamacher, D.W.; Barsa, J.; Passi, S.; and Tapim, A. (2019). Indigenous use of stellar scintillation to predict weather and seasonal change. Proceedings of the Royal Society of Victoria (in review)