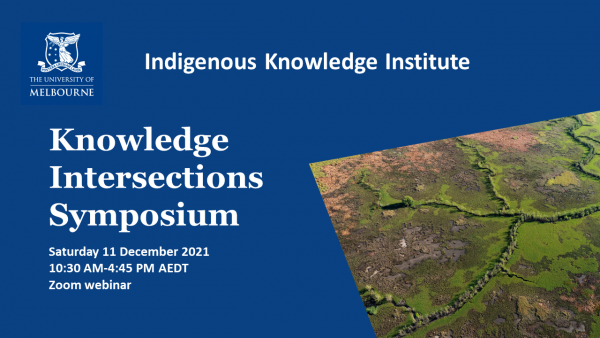 The recording of the 2021 Knowledge Intersections symposium can now be watched online.

Join the Indigenous Knowledge Institute as we explore the relationships between music and lore through multidisciplinary panel discussions.

This online symposium is being held within the 20th Symposium on Indigenous Music and Dance, in association with the Musicological Society of Australia’s 44th National Conference.

The approximate schedule is below. All times are in AEDT. Find out what time that is for you here.

10:50 Panel 1: Global perspectives on cultural continuity and change — This panel brings together a diverse array of speakers from Aotearoa (New Zealand), Taiwan, Brazil, and Australia to discuss how Indigenous peoples understand and negotiate ideas and expressions of cultural continuity and change in their respective counties. We will examine how understandings of cultural continuity in a changing world are often at odds with outsider assumptions about Indigenous cultures and, in some cases, work against the localised cultural maintenance needs of Indigenous peoples. Speakers will bring to this discussion reflections their own research and cultural practices, as well as their own engagements with (other) Indigenous cultural practitioners across a range of contexts from local to global.

12:55 Panel 2: Sky knowledge and performance traditions — Indigenous peoples hold the world’s oldest continuous cultures of astronomy. Developed and passed down over tens of thousands of years, Indigenous observations of the Sun, Moon, and stars inform navigation and calendars, and predict weather, while the meanings and agency assigned to astronomical phenomena significantly inform Indigenous laws and social structures. This panel brings together Indigenous Elders and other speakers from Australia, Aotearoa (New Zealand), and the USA to share how Indigenous song and dance traditions, as performed in public ceremonies, carry detailed intergenerational knowledge of how Elders read the stars and other astronomical phenomena.

2:00 Panel 3: Engineering and aquaculture in Indigenous knowledge practice — Over tens of thousands of years of habitation, Indigenous Australians developed sophisticated understandings and techniques for engineering, physics, and aquaculture in the design of elaborate stone fish traps, such as the ancient Ngunnhu in Brewarrina, and the 100 km squared eel farm at Budj Bim (Lake Condah) in Victoria. These aquaculture structures comprise complex canals systems linking weirs and ponds made of river stones and may be some of the oldest surviving human-made structures in the world. This panel brings together people with ancestral ties to important ancient aquaculture sites and discusses the sites' significance for Indigenous law, culture, and resource management both historically and today.

3:30 Panel 4: Wild Honey: Caring for Bees in a Divided Land screening — For more than a century, the island of Timor has been divided by a colonial border. This border has displaced and separated the people of Lookeu, dividing their land, water, and history. Timor's migratory wild honey bees challenge this division. Their migrations are essential to the agricultural and spiritual wellbeing of the people and places who depend upon them. In community honey harvest rituals, queen bees are courted in ceremony by men who climb high into the canopy to sing nocturnal forest love songs. These songs express gratitude to the bees, enticing and imploring them to give up their sweetness and maintain their seasonal visits. This panel will screen and discuss the film Wild Honey: Caring for Bees in a Divided Land. This film is the outcome of a long-term collaboration between researchers Balthasar Kehi and Lisa Palmer and the people of Balthasar's homeland of Lookeu. It portrays a border community who, despite changing farming practices and increasing commodification, are determined to maintain the bees' movement across the region and preserve their shared identity.

Speaker biographies can be found below (this list will be updated).

Akawyan Pakawyan is from the Puyuma village of Taiwanese Indigenous ethnic group, Pinuyumayan. Born in 1938, Akawyan has had a long and distinguished career as a teacher and choreographer and has worked with various Indigenous peoples in Taiwan to maintain their unique music and dance traditions. In 1980, she established the Taiwan High-Mountain Dance, Theatre, Culture and Art Service Troupe to strengthen the performance traditions of her own people, and has since received many national honours in recognition of her work, including the Golden Perseverance Award. She has also been Artistic Director of the Puyuma Chapter of the Taiwanese National Theater’s Indigenous Music and Dance Series.

Professor Yuh-Fen Tseng received her PhD from Taipei National University of the Arts (majoring in Ethno-Musicology) and Master of Arts degree from New York University (majoring in piano Performance). She is currently Professor at the music department of National Chiayi University in Taiwan. Knowing Indigenous cultural heritages are vanishing quickly, Yuh-Fen has been long devoting herself to the preservation of Taiwanese Indigenous music and dance. Her representative works include “Legend of White-Stone Mountain: A Video Recording on the Oral Music Traditions of Seediq People and Truku People” and “An Improvisational Study on the Vocal Music of Seediq & Truku”.

Professor José Jorge de Carvalho holds a PhD in Social Anthropology from The Queen’s University of Belfast. He is a professor of Anthropology at the University of Brasília and Head of the Institute of Inclusion in Higher Education. In 2010 he initiated the project Meeting of Knowledges, already present in 20 universities, designed to invite the masters of oral knowledge of Indigenous and other traditional peoples to teach in universities on a par with academic professors. The aim of those two efforts is to help building a multiethnic, multiracial and pluriepistemic university.

Professor Aaron Corn holds a research background in music and collections and has collaborated closely with Indigenous colleagues in interdisciplinary initiatives since the 1990s. He presently works as Inaugural Director of the Indigenous Knowledge Institute at the University of Melbourne and serves as a Director of the National Recording Project for Indigenous Performance in Australia. His research engages with the durability of Indigenous knowledge and new strategies for strengthening human cultural diversity in the digital age. He has collaborated with Indigenous and other colleagues on many Australian Research Council and other research projects.

Professor Marcia Langton AO is an Aboriginal woman of Iman descent. She is an anthropologist and geographer with a strong research track record on Aboriginal alcohol use and harms, family violence, Aboriginal land tenure, management of environments and native title, and aspects of Aboriginal culture, art and performance and the shift to modernity. Professor Langton has held the Foundation Chair of Australian Indigenous Studies at the University of Melbourne since 2000, and was appointed Associate Provost in 2017. Professor Langton is a Fellow of the Academy of Social Sciences, a Fellow of Trinity College, Melbourne and an Honorary Fellow of Emmanuel College at the University of Queensland.

Duane Hamacher is Associate Professor of Cultural Astronomy in the ASTRO-3D Centre of Excellence and the School of Physics at the University of Melbourne. His work specialises in the intersection of astronomy with culture, heritage, history, and society. He earned graduate degrees in astrophysics and the social sciences and is leading initiatives in Indigenous astronomy and dark sky studies.

Wanta Jampijinpa Patrick is a Warlpiri elder and director of the Milpirri Festival, Lajamanu. He has led and collaborated on research projects through the Australian Research Council, which give focus to Warlpiri song, epistemology, education, the repatriation of archival records, and youth engagement. He has provided policy advice on Indigenous law, education, and youth matters to multiple government and industry bodies, including the Australian Government’s Indigenous Voice National Co-design Group, the Australian Institute of Aboriginal and Torres Strait Islander Studies, and the Northern Territory Department of Education.

Inawinytji Williamson is a senior law woman and traditional owner of the Kungkarangkalpa Seven Sisters Songline of the Anangu Pitjantjatjara and Yankunytjatjara lands. Inawinytji is a senior song and law woman, a custodian of great oral traditional knowledge archives and teacher of Songlines inma. She was a lead co-researcher on the Songlines of the Western Desert ARC Project and co-curator the Inma performance and exhibition of the Seven Sisters Songline at the National Museum of Australia.

Dr Diana James has worked collaboratively with Inawinytji Williamson and other Elders over forty years recording song, story, and dance traditions on the Pitjantjatjara Yankunytjatjara, Ngaanyatjarra, and Martu Lands. She is the senior research associate and coordinator of the Songlines of the Western Desert ARC Project and co-producer of the performance and exhibition of the Seven Sisters Songline at the National Museum of Australia.

Jesse Hodgetts is a Wangaaypuwan Ngiyampaa and Wiradjuri man and was born and raised on Darkinyung country. Jesse is a singer and teacher at the Wollotuka Institute of the University of Newcastle, teaching and researching First Nations education, language, and song. Jesse is currently exploring historic Ngiyampaa and Wiradjuri songs and how they can inform Aboriginal song, language, and cultural revitalisation in NSW today.

Peter Williams is from Brewarrina in northwest New South Wales and is a descendant of the Ngiyampaa-speaking Garulgiyalu people. Through his practice as a singer/composer, dancer, and visual artist, he has become an influential leader in the reclamation and revitalisation of Aboriginal cultural practices in New South Wales with a strong focus on passing knowledge to future generations. He has worked with performance companies in NSW and Queensland for more than two decades and has performed professionally around Australia and the world.

Associate Professor Lisa Palmer is an academic, writer, and filmmaker who teaches and researches at the University of Melbourne. She lives in Melbourne and regularly travels to Timor-Leste to carry out research and visit extended family. She has published widely in academic journals and is the author of two books: Island Encounters: Timor-Leste from the outside in (ANU Press, 2021) and Water Politics and Spiritual Ecology: Custom, environmental governance and development (Routledge, 2015). She has made two films about the island of Timor: Wild Honey: Caring for bees in a divided land (Ronin Films, 2019) and Holding Tightly: Custom and Healing in Timor-Leste (Ronin Films, 2021).

Balthasar Kehi lives in Melbourne and returns whenever he can to his homeland of Lookeu in Timor. He has worked in research internationally for various schools and academic institutions and was for many years a Research Fellow at the School of Geography at the University Melbourne. He holds a PhD from Columbia University, New York. His main field of academic interest included philosophy, psychology and education. He is co-author of Hamatak Halirin: The cosmological and socio-ecological roles of water in Koba Lima, Timor, Bidragen tot de Taal-, Land- en Volkenkunde 168 (4): 446-471. Dr Kehi may be contacted at bklookeu@gmail.com.